From its earliest days, when 19th-century power brokers sought to make it a weekend paradise for wealthy San Franciscans, Burlingame has been one of San Mateo County’s most desirable addresses. The Peninsula is full of great, livable towns, but you’d be hard-pressed to find one as charming as the “City of Trees.”

Burlingame’s origins date back to 1893, when Francis Newlands decided that his father-in-law William Sharon’s dairy lands would make a great setting for a development of country homes and a country club. The Burlingame Country Club was named after Anson Burlingame, Abraham Lincoln’s Ambassador to China, who ironically had only visited the area once, as the guest of Bank of California founder William Ralston.

That the five “cottages” Newlands built sat unsold for years didn’t seem to matter. By 1904, Burlingame had a reputation as being “where San Francisco (had) its country headquarters.”

Burlingame grew quickly, and as a result has more of a traditional architectural feel than many of its Peninsula neighbors. You’ll find plenty of examples of English, Arts and Crafts and Mediterranean architecture, but not much from the second half of the 20th century in its quaint, tree-line neighborhood streets, and its two downtown centers, Burlingame Avenue and Broadway, have the classic “Main Street U.S.A” feel of a long-established town.

Burlingame came to have two downtowns when the city absorbed its northern neighbor, the town of Easton, a century ago. Each has a distinctive character. Broadway, located in the former Easton, is where you’ll find traditional “mom and pop” businesses, grocery stores and pharmacies, along with classic restaurants like the Broadway Grill and Preston’s, a candy store and local institution which has fed the local sweet tooth for 60 years.

Burlingame Avenue, Burlingame’s “original” downtown, has over time evolved into a high-end shopping and dining district. Whether your fancy is unique children’s clothing from Janie and Jack, Baby Couture or Zoli, the latest from Banana Republic or J. Crew, a tailored suit from Sam Malouf or a new iPad from the Apple Store, “The Ave” has you covered.

Burlingame Avenue restaurants range from taquerias to fine dining – and everything in-between.  It’s difficult to resist the allure of longtime Ave. favorite Copenhagen Bakery and just as hard to pass up the fusion fare at Straits, the casual vibe at the Steelhead Brewery or the elegance of Il Fornaio. Though they live only 20 minutes from San Francisco, Burlingame locals have little reason to leave their town to dine out.

Of course, there’s more to life than restaurants and retail; there’re also parks and schools, festivals and fairs, outdoor living and the warmth that comes from living in a close-knit community. Burlingame’s schools are a major draw for families, among the region’s most highly rated. Each fall, the football stands at Burlingame High overflow for the school’s annual “Little Big Game” versus rival San Mateo. Many of the same locals come out in September to watch local dogs, cats, birds, lizards and a few other exotic animals parade down Broadway – some in costume — at the annual Burlingame Pet Parade, a month after joining 125 artists and musicians on The Ave. for the Burlingame Artzfest.

Burlingame has many neighborhood parks, plus Coyote Point, a onetime waterfront amusement park converted into green space, with trails, beaches, a marina and the Coyote Point Museum for Environmental Education.

It’s no mystery why Burlingame is so popular among families, Silicon Valley and San Francisco workers. Who wouldn’t want to join a friendly, attractive community with beautiful residential neighborhoods and two thriving downtowns? Francis Newlands was a just little bit off in his original vision for Burlingame, but locals wouldn’t have it any other way. 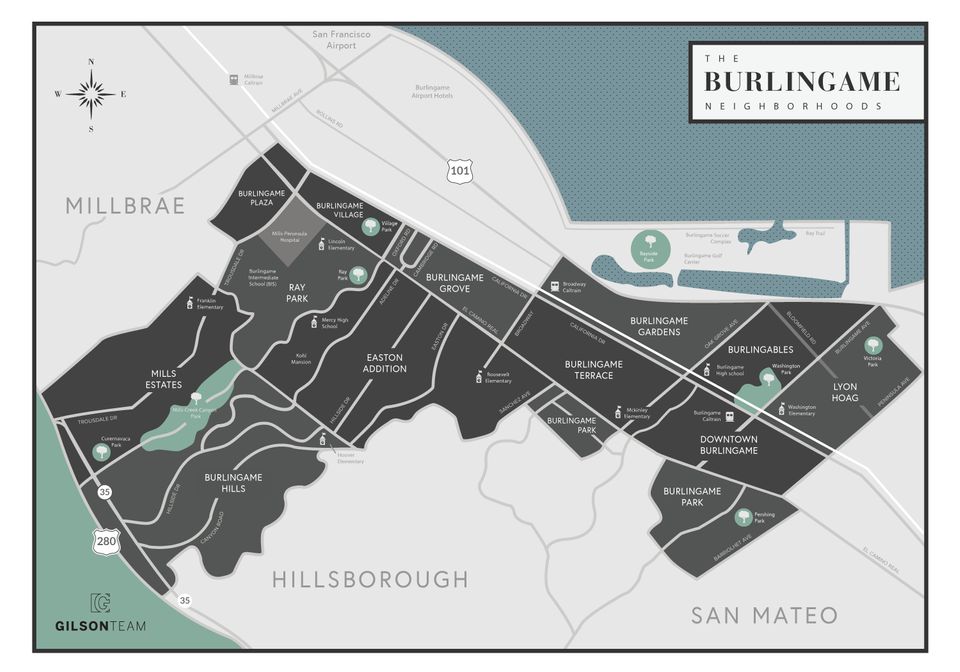 🍁 Fall is in the air and we couldn’t be more